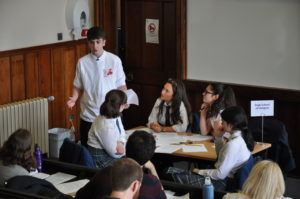 Matches feature two teams.  Each team can be composed of three to five members in any one match.  The team members must be selected before the moderator opens the match.  Timekeepers run the match.  They keep time and move the match through its various components while ensuring that all participants comply with the rules.

To open the first half of the match, the timekeeper takes control of the screen and displays the case.  (Neither the judges nor the teams will know in advance which case will be used.) The timekeeper will then read out the case title and the questions that accompany the case as it’s written in the case set.

Team A will have up to two minutes to confer, after which any member(s) of Team A may speak for up to six minutes (total) laying out the Team’s view regarding the case.  This is known as the Presentation Period.

Next, Team B will have up to one minute to confer, after which Team B may speak for up to three minutes in response to Team A’s presentation.  This is known as the Commentary Period.

Team A will then have up to one minute to confer, followed by three minutes to respond to Team B’s commentary.  This is known as the Response Period.

The judges will then begin a ten-minute question and answer session with Team A.  Before asking questions, the judges may confer briefly.  Each judge should have time for at least one question, and may ask more questions if time permits.  Teams are allowed to briefly confer (20 to 30 seconds) before answering a judge’s question.  More than one team member may respond to a given judge’s question.  This is known as the Dialogue Period.

After the judges have made their scoring decisions, the timekeeper will take control of the screen, display the second case, and read its title and questions to the same two teams, beginning the second half of the match.  Neither the judges nor the teams will know in advance which case will be used.

The match will proceed, as above, with Teams A and B switching roles.  The judges will then assign scores to each Team’s performance once again, following the rubric above.  Thus, in each match, each team will have the opportunity to present one case and to respond to the other team’s presentation of another case, for a total of 60 points possible from each of the three judges.

Timekeepers will help validate scores with the judges and tabulate, based on the scores, which team receives each judge’s vote.  For example:

Here, Team A is the winner of the match with two judges’ votes despite the fact that Team B had a higher overall point total.

If a judge scores both teams equally (a tie), both teams are awarded ½ of that judge’s vote.  A group stage match ends in a tie if all three judges score the match a tie or one judge votes for Team A, one for Team B, and one scores a tie.  Things are handled differently in knockout stage matches; see the scoring page for details.